Situated 15 miles from Cape Rodney and 11 miles from Aotea (Great Barrier Island), Hauturu bursts out of the ocean; its knife-edged ridges rising to 2,370 ft at the summit of Mt Hauturu. The 3,038 ha island, fringed by an almost continuous boulder beach except where vertical cliffs plummet into the ocean, is a site steeped in rich Maori cultural tradition and Nationally significant conservation initiatives; and is home to some of New Zealand’s rarest and most threatened fauna and flora.

The name Hauturu, was traditionally bestowed by Toi, who arrived in New Zealand from Hawaiki in c. 1150 AD in search of his grandson Whatonga. It was said that the island was uninhabited by “ordinary mankind” but on the misty summits lived the Patu-pai-arehe (fairies), visiting the coastline only at night or in misty weather to fish and collect kai moana (sea food) (Hamilton 1961).

While the thought of night-faring fairies is somewhat hard to believe, there is undoubtedly some truth in the myth…as at night, the island truly becomes alive! Scaly creatures, spiny giants, venomous villains, feathery beasts, and slimy critters emerge and take over the forest floor. However, even so, walking at night requires cautious and vigilant steps, alerted senses, and often quick reactions to catch a glimpse of the island’s inhabitants.

By day the island is alive with bird song, and in fact, Hauturu harbours the highest number of threatened bird species compared to any other island in the country! Their calls penetrate and echo through the 400-plus species of plants and in particular, the dawn chorus is simply mind-blowing; arguably unmatched by any other site in New Zealand.

In January 2014, I was fortunate enough to join a team of conservationists, lead by Auckland Council ecologist Su Sinclair, on a lizard project, aimed at translocating Pacific geckos (Dactylocnemis pacificus) to two Hauraki Gulf Islands undergoing ecological restoration. The following series of photographs represent some of the treasures found on Hauturu during our ten day stay in paradise.

Sphenodon punctatus (Northern tuatara) – this fellow is part of an island breed-for-release programme.

Chris Wedding showing off a beautifully marked Dactylocnemis pacific us. This little gecko now has a new home on Motuora Island, Hauraki Gulf. 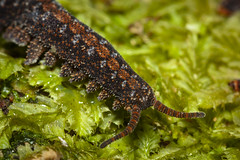 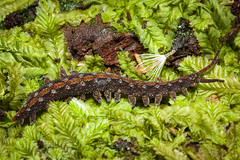 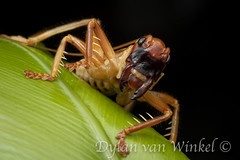 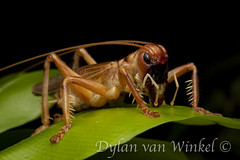 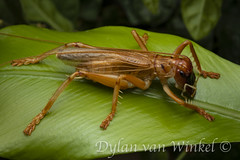 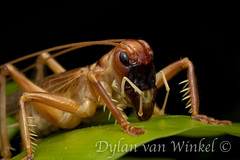 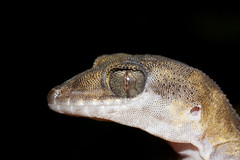 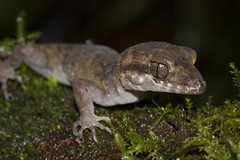